LAS VEGAS (AP) — Jack Murphy zigzagged across his hometown, ducking into gyms to watch AAU basketball players on all points of the Las Vegas compass.

Some stops lasted minutes, long enough for Murphy to stand near a doorway to evaluate a player who just popped up on his radar. Others, he stayed the entire game, prominently positioned with an assistant coach at his side in a show of solidarity toward a player — and his family — they hope to sign.

The Northern Arizona coach made 11 stops in all — some gyms multiple times — that 14-hour, crisscrossed day, the first of three marathons during the summer’s final live evaluation period.

Murphy was not alone; hundreds of coaches from across the country burned through tanks of gas to watch the nation’s best young basketball players in late July.

One significant difference: Murphy and other coaches of low-major programs sought a different type of talent than coaches at the highest echelon of Division I.

Of course Murphy noticed the five-star recruits, those long, agile players, heads above the rim, rainbowing in 3-pointers from all angles. It doesn’t take a coach to see their talent.

By necessity, Murphy’s sights were much further down the recruiting spectrum.

“Would I love to have one of those elite players? Absolutely. Who wouldn’t?” Murphy said. “But that’s not the world we live in.”

The low-major programs are often in different galaxies than high-major schools.

College basketball has one of sports’ most unique structures, 351 schools all supposedly on the same level.

Reality: The low-majors rarely stand much of a chance against the power programs, faced with a multitude of disadvantages, from finances to facilities to travel.

Recruiting is a huge one.

While top-tier programs fight over future pros, low-major coaches go after players with fewer stars before their names.

They seek overlooked players who somehow slipped through the far-reaching recruiting cracks. They recruit skilled players who might be a little too short or skinny to draw interest from the power programs. They search for someone who can fit their system or be molded into it.

“I couldn’t tell you who the No. 1 kid in the country is,” Sacramento State coach Brian Katz said. “Unless he’s on our radar, I don’t know who anybody is. I can walk into a gym and figure out where I am right away. If all the big boys from the ACC are there, I’m probably on the wrong court. You’re typically fishing from a little different pond than those guys.”

Recruiting has always had a shady side, filled with backroom deals, gifts, even paying recruits to attend a certain school.

The veil of the worst-kept secret in college basketball was ripped back in August, when 10 people — four assistant coaches from prominent schools among them — were arrested as part of a federal investigation that revealed kickbacks and bribes from shoe companies being used to sway players.

Louisville coach Rick Pitino and athletic director Tom Jurich were fired, and the tentacles will likely reach deeper, casting an even darker shadow over the sport.

Low-major coaches won’t have to hide.

Shoe-company money gets funneled to top-tier players, potential NBA stars worth millions. Most low-major players are more likely to work at a shoe company than to become an NBA star.

High-majors have multimillion-dollar shoe deals. Low-majors, far less lucrative, if any at all.

The notion of paying a player $150,000 to attend a low-major school? Laughable.

What low-major coaches can offer is a chance to improve and earn a degree.

That’s not to say coaches at high-major programs don’t make players better. It’s just that they’re often preparing already high-end players for the next level. Well, that and winning games.

Low-major players have talent — they wouldn’t be playing Division I basketball otherwise — but often aren’t as polished as the five-star recruits.

So when low-major coaches are in the living rooms of recruits, they tout the school, the program, the town, but also the ability to develop them as players.

Low-major coaches are often masters of developing fundamentals. It’s the only way their teams have any shot against high-major, even mid-major teams, but also because their players often don’t get the high-level coaching found on the travel-team circuits.

“You’ve got to be so good at that because when you go into the recruiting process, that’s the thing you’ve got to sell,” said former Wake Forest and South Carolina coach Dave Odom. “‘If you’re good enough to get to the NBA, I will develop you and get you to that point.’ They have to drive that home.”

Once low-major coaches get a foot in the door, it’s work fast or risk getting locked out.

Recruiting has turned into an all-seeing monster, top players sometimes identified by the eighth grade, their every point and rebound documented.

They look at end-of-the-bench players on big AAU teams; talented, but buried behind the five-stars. Could be a player who didn’t play AAU ball or one tucked away in a small school or town off the recruiting grid.

And the clock is constantly ticking.

In the overexposed world of recruiting, it’s a matter of time before a major program unearths a once-hidden talent and whisks him away from the smaller schools.

The high turnover rate in coaching also takes a toll. New high-major coaches sometimes sign mid-major-type players to fill out a recruiting class, causing a trickle-down effect on the low-majors.

That’s what makes the early-signing period, which ended on Monday, so important to the low-majors. Sign a recruit in the fall, they don’t have to worry about another school snatching him up. Wait until spring, there’s a chance another school will be onto him.

“There’s just so much time between November and April,” Murphy said. “To get guys in the fall, it really solidifies your program, helps you understand who you have coming in and you can get a steal in that time period. Whereas if it drags out, you lose.”

Recruiting, like most of life in the mid-majors, is a never-ending fight to win the little battles with the power programs. 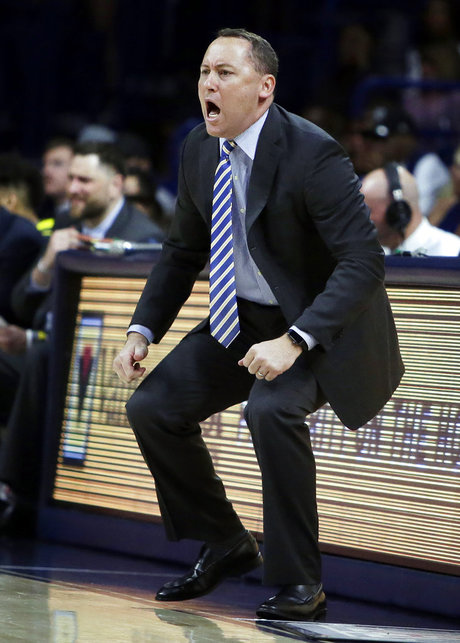 FILE – In this Nov. 10, 2017, file photo, Northern Arizona head coach Jack Murphy reacts in the first half during an NCAA college basketball game against Arizona, in Tucson, Ariz. Murphy zigzagged his way through his hometown to watch recruits play in gyms across Las Vegas. While coaches at schools like Duke, Kansas and Arizona had their eyes set on the elite, five-star players during the high school showcases, Murphy and coaches at other low-major programs had their sights set on players much further down the recruiting ladder. (AP Photo/Rick Scuteri, File) 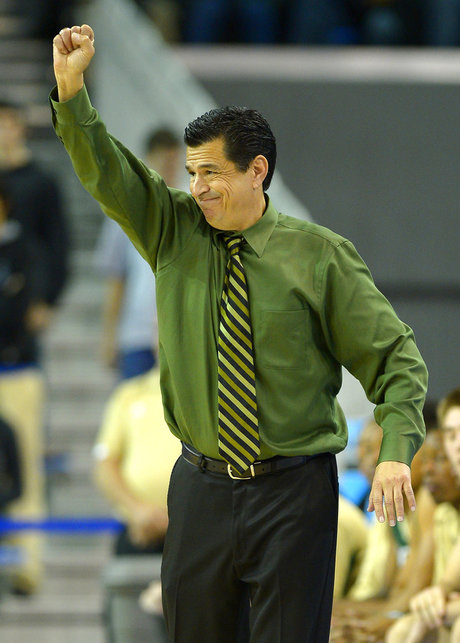 FILE – In this Nov. 18, 2013, file photo, Sacramento State head coach Brian Katz gestures during the second half of an NCAA college basketball game against UCLA, in Los Angeles. While coaches at schools like Duke, Kansas and Arizona had their eyes set on the elite, five-star players during the high school showcases, coaches at other low-major programs had their sights set on players much further down the recruiting ladder. (AP Photo/Mark J. Terrill, File)