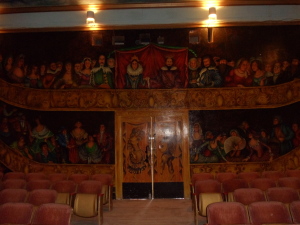 DEATH VALLEY JUNCTION, Calif. (AP) — The Amargosa Hotel was once a hub of activity, the Spanish Colonial-style buildings filled with workers from the Pacific Coast Borax company.

Once the mine shut down, the people left, leaving the U-shaped hotel and the opera house attached to it at the center of what is now considered a ghost town.

“There wasn’t much reason for people to stick around, other than to stay at the hotel or visit the opera house,” the Amargosa’s Bob Muldowney said during a tour of the opera house. “Now, that’s all that’s left.”

Death Valley Junction wasn’t the only town to feel the boom and bust of the Old West mining days.

Ghost towns dot the landscape all across the southwestern United States, once-thriving cultural hubs abandoned and left in shambles.

Many are still fairly well-preserved, though, and offer visitors a chance to see a piece of history — even if it is in pieces.

Here are a few of the more popular ghost towns in the Southwest:

Located near the Nevada state line east of California’s Yosemite National Park, Bodie is one of the most famous ghost towns in the United States, in part because it’s so well preserved. The town boomed during the Gold Rush days, with an estimated 10,000 residents in 1880, more than 60 saloons and a red-light district. Once the mine shut down, so did the town, all but abandoned by the early 1900s. Today, its 100-or-so buildings are maintained by the California parks system, which protects the town in “an arrested state of decay,” keeping the buildings standing but making few other alterations. Bodie is located 13 miles (21 kilometers) off Highway 395 down a dusty, bumpy road in an isolated area, so make sure you have plenty of gas. Also, beware if you take off with an artifact from town — a curse reportedly comes with it until the item is returned. Details: http://www.parks.ca.gov/?page_id=509.

Originally called Turquoise, Gleeson is one of several ghost towns near the famous Wild West town of Tombstone. Native Americans first mined turquoise in the area and settlers found copper, lead and silver in the area in the late 1800s. A fire destroyed 28 buildings in 1912, but the town was rebuilt and continued to thrive until the mines shut down around 1940. A handful of people still live in the area, but it still has the ghost-town feel with numerous buildings in various states of decay. Ruins include a hospital, a saloon and store, a jail, the foundation of a school and a cemetery. Courtland and Pearce also are nearby, part of what is known as the Ghost Town Trail. Details: http://www.ghosttownaz.info/gleeson-ghost-town.php.

If you like decrepit buildings in your ghost town, this is the place to see. Located northeast of Death Valley National Park, Rhyolite was established in 1905 during the Gold Rush and grew quickly, filled with buildings that had electricity, water mains, an opera house and a stock exchange. It fell apart nearly as fast; the mine closed in 1911 and the town was all but abandoned by 1920. Since then, it has become one of the most photogenic ghost towns in the West because of the crumpled buildings and the impressive rocky landscape around the area. The town became a popular site for movies and some of the buildings were further destroyed during shooting. Among the ruins are the Bottle House, walls from the three-story bank building, part of the jail and an old caboose. Details: http://www.nps.gov/deva/historyculture/rhyolite-ghost-town.htm.

The town near the eastern entrance of Death Valley National Park thrived while the borax mine and Death Valley Railroad were still in operation. By the late 1920s, Death Valley Junction was little more than a tourist stop on the way to the park. Though most of the buildings are gone, the town is still a draw today, thanks to the Amargosa Hotel. The hotel claims to be haunted and the Amargosa Opera House is a must-see. Marta Becket, a former Broadway ballet dancer, purchased the hotel in 1967 and restored the opera house, covering the walls and ceiling with hand-painted murals so she could perform in front of an audience. The opera house still has performances today, typically with local performers on Saturday nights. Details: http://www.nps.gov/deva/historyculture/death-valley-ghost-towns.htm and http://www.amargosa-opera-house.com/.

If you’re into touristy ghost towns, Goldfield is the place to visit. Located in Apache Junction just outside of Phoenix, it became a bustling town when gold was discovered in the 1890s. Goldfield had about 4,000 residents, a general store, post office, school and hotel during its heyday, but was all but abandoned after the gold vein dried up in the 1920s. Today, the town has become a popular tourist attraction, with daily Old West gunfights, gold panning and rides on Arizona’s only narrow-gauge train. Numerous tours are available, including through the Goldfield Mine, Lu Lu’s Bordello, the Mystery Shack and the Goldfield Historic Museum. Details: http://goldfieldghosttown.com/.