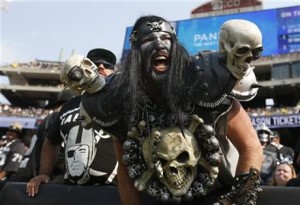 FILE – In this Sept. 13, 2015, file photo, Oakland Raiders fans watch during the second half of an NFL football game between the Oakland Raiders and the Cincinnati Bengals in Oakland, Calif. The south end zone sections of Oakland-Alameda County Coliseum are known to have some of the rowdiest fans in American sports, face painters who dress up in evil costumes, often with spike-covered shoulder pads. (AP Photo/Tony Avelar, File)