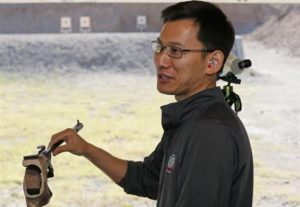 In this photo taken, Saturday, May 7, 2016, Jay Shi, an Olympics qualifier for the 2016 Rio Olympics in free pistol and air pistol, talks about one of his pistols as he practices at a local shooting range in Phoenix. Shi has overcome damaged to his right eye to qualify for U.S. Olympic Team. He learned to shoot cross-eyed after injuring his eye as a child in his hometown of Beijing. (AP Photo/Ross D. Franklin)