POCATELLO, Idaho (AP) — As the bus rolls past mileage signs for places like Malad City, Arimo and Woodruff, the long frames of Northern Arizona’s basketball players splay across the seats. Heads rest on makeshift pillows of jackets and backpacks, legs stretch across aisles, feet rise above headrests.

Outside, flurries dance in the headlights as roadside reflectors flash like car turn signals. Yellow weed stalks, evidence of a recent thaw, peek through the white blanket along the highway.

The players are oblivious to the cold world outside. Their only concern is finding comfort on this opening three-hour leg of a two-day return to Flagstaff, Arizona.

“It’s pretty hard travel after a game,” NAU coach Jack Murphy said. “You want to get home, get the guys some rest on their day off, but it’s a long day of travel on their ‘day off.'”

Travel is one of the most arduous aspects of college basketball. Hours upon hours every season are dedicated to getting to the next town, buses and planes essentially becoming players’ and coaches’ mobile second homes.

Some have it easier than others.

At the highest levels of Division I, buses park next to charter planes filled with spacious seats, teams’ schedules based on when the runway is open. Convenience affords efficiency: Practice at home, fly out in the evening, play the next day, head straight home.

Travel at the low-major level can feel like “Planes, Trains and Automobiles.” All that’s missing is the train and Del Griffith.

Charter flights are not within the smallest D-I schools’ budget, so commercial is the only way to go. That means long security lines and clock-watching gate waits, just for the opportunity to fold into seats barely big enough for averaged-sized humans.

Six-foot-10 and a middle seat is like 5-9 squeezed into a toddler car seat.

“I’m hurting for like two hours and when I get up, my knees finally get back to normal,” said Isaiah Thomas, NAU’s 6-9 junior forward. “It’s not enjoyable.”

The dilemma: Early-morning practice before flying out or a pre-sunrise departure to practice later at the destination? For the return, leave early on little sleep and rest later or sleep in and get back later?

No matter how coaches work it, the players end up tired.

“You have to factor it in,” Sacramento State coach Brian Katz said. “You try to convince your guys, you’re 19 years old, you shouldn’t get tired from anything. But in your mind you try to account for it because it’s a factor for sure.”

A two-hour layover in Phoenix followed, a nearly two-hour flight to Salt Lake City next, a 50-minute bus ride north to Ogden after that. Once at the hotel, players grab room keys from director of basketball operations Bryan Fisher, get a short rest then it’s a film session in a conference room and practice at Weber State’s Dee Events Center — 11 hours after leaving home.

“You can spend an entire day trying to get where you need to go,” said Mitch Strohman, radio and TV voice of NAU basketball since 1991. “People don’t understand how much energy that sucks out of you. You’re exhausted. That’s a lot to ask the body to do, no matter how young you are.”

Buses. So many buses.

Low-major players and coaches often feel like they spend more time on buses than at home.

Many of the smallest D-I schools are in remote places. Getting there requires multiple connecting flights — often on regional jets or prop planes — and soul-sapping bus rides.

A bus trip of an hour or two can be tolerable. Each tacked-on hour seems to add an exponential level of misery.

Riding on a bus is a bit like flying coach: The cabin and seats are purportedly made with long-range comfort in mind, yet somehow fail to meet expectations.

Among the smaller conferences, the Big South or SWAC don’t have it too bad. A few hours in a bus, in most cases, can get teams where they need to go.

The Big Sky could be called the Big Bus Conference.

Stretching from Eastern Washington to North Dakota, down to Flagstaff, around to Sac State and Portland State, the Big Sky covers nine states and roughly a third of the United States.

Portland State, Sac State and, to a degree, Northern Colorado, are in, or at least near, major metropolitan areas. Everything else is a connecting flight or bus ride away.

Want to white knuckle from the back seat of a bus? Try riding from Bozeman to Missoula during a snowstorm. A prop plane in winter can have passengers locating the “sickness bag” in the seat-back pocket in front of them.

“Some of these trips can be a nightmare,” said Idaho State coach Bill Evans, who also spent 16 seasons at Southern Utah. “It’s a tough business.”

The Lumberjacks arrive at their Salt Lake City hotel around midnight after the dark-and-icy ride from Pocatello and shuffle to their rooms. Less than five hours later, they’re in the lobby again, heavy feet dragging in the pre-dawn darkness to the bus.

The 6:45 a.m. flight to Phoenix arrives a half hour early, which apparently flummoxes the crew at Sky Harbor International Airport. A 15-minute wait on the tarmac follows. Of course the gate wasn’t open yet.

Once the why-does-this-take-so-long process of deboarding finishes, the NAU contingent wanders from A to B (gates) of Terminal 4.

After a one-hour layover and a 67-minute flight, they’re finally back in Flagstaff, 13 hours after a four-point loss to Idaho State.

“There’s just no easy way to do it,” Murphy said.

Two weeks later, they get to do it all over again — to Bozeman and Missoula. 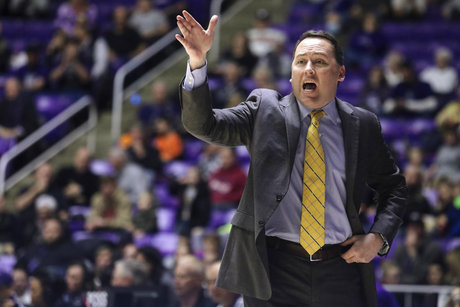 FILE – In this Jan. 4, 2018, file photo, Northern Arizona coach Jack Murphy calls to his team during the first half of an NCAA college basketball game against Weber State, in Ogden, Utah. High-major college basketball programs fly on chartered jets, stay in upscale hotels and eat at nice restaurants. The smallest of the 351 schools in Division I fly coach, look for hotel and meal deals and are forced to catch early-morning flights the day after games to get back to school. The difference in travel arrangements takes a toll. (Matt Herp/Standard-Examiner via AP, File) 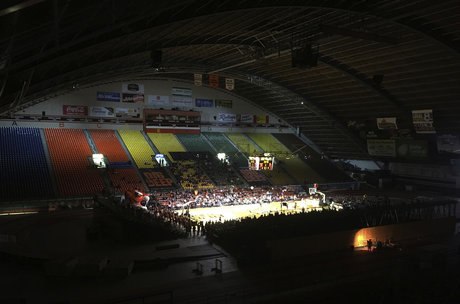 In this Jan. 6, 2018, photo, Northern Arizona plays Idaho State in a men’s basketball game at Holt Arena in Pocatello, Idaho. The basketball court is set up at the north end of the multi-purpose arena with temporary bleachers on two sides. Holt Arena is also used for football, track and a variety of events in town. (AP Photo/John Marshall) 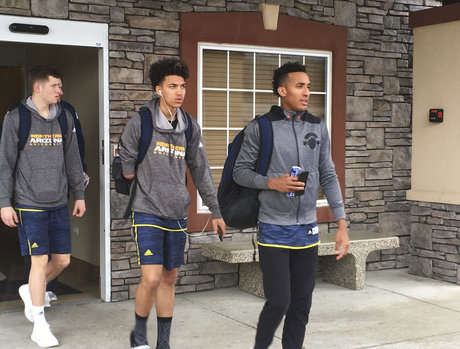 In this Jan. 5, 2018, photo, Northern Arizona basketball players Luke Avdalovic, Omar Ndiaye and Gino Littles leave the team hotel in Ogden, Utah to board a bus for their next game in Pocatello, Idaho. Unlike high-major programs that fly on charters and eat at nice restaurants, the Lumberjacks fly commercially and eat at chain restaurants to save money. (AP Photo/John Marshall) 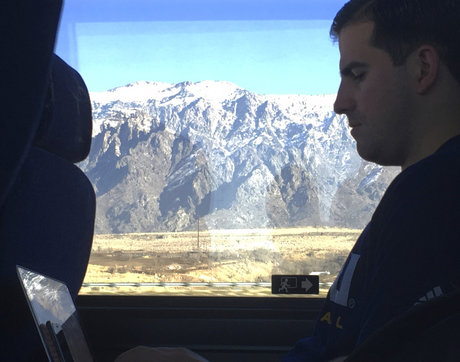 In this Jan. 5, 2018, photo, Northern Arizona assistant basketball coach Jason Sanchez goes over game film from the night before on a bus ride to Pocatello, Idaho. The Lumberjacks lost to Weber State by 40, then had to leave the next day on a two-hour bus ride for a game against Idaho State before driving back through Ogden to Salt Lake City. (AP Photo/John Marshall)